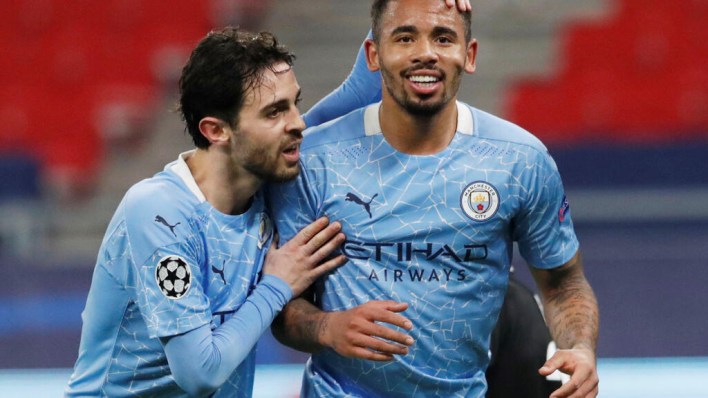 Manchester City and Real Madrid are close to reaching the quarter-finals of the European Champions League on Wednesday, after the first victory over Borussia Monchengladbach, Germany, with a clean double, while the second snatched a deadly goal in front of Atalanta, Italy.

All of Manchester City are the English And real The Spaniard, on Wednesday, is close to reaching the quarter-finals of the Champions League, with the first victory over its German host Borussia Monchengladbach by a clean double, while the second grabbed a fatal goal against Atalanta in the first leg of the final round of the continental competition.

Manchester City scored a precious double clean victory over its German host Borussia Monchengladbach, in what seems to decisively qualify before the second leg on March 16th. City owes its victory to the double of its Portuguese star Bernardo Silva (29) and Brazilian striker Gabriel Gesos (65).

Borussia Monchengladbach coach Marco Roze played the match, seeking to win to alleviate the repercussions of announcing his move to coach Borussia Dortmund next season, which angered the fans of the team.

But City, the winner of 19 consecutive matches in various competitions, and 12 successive away from home, resolved the confrontation that took place in Budapest due to the repercussions of the Corona virus, deepening the wounds of Mönchengladbach, who recently emerged from an unexpected loss in front of Mainz (1-2), who is threatened with relegation to the second division in Bundesliga.

And at the “Puskas Arena”, City, which boasted of defeating Everton, Liverpool, Tottenham and Arsenal in the Premier League, imposed total control over the match. The first half saw many dangerous opportunities, which did not bear fruit from the English side at first, in the midst of a defensive retreat for the German team.

The 29th minute was the date for the opening of the scoring by the “Citizens” with a pure Portuguese goal, with a beautiful header from Silva after a long forward pass by his compatriot Joao Cancelo.

In the second half, not much changed, and City continued to press, until the Spaniard’s men, Josep Guardiola, managed to double the score in the 65th minute, when Cancelo lifted a cross, and reached Silva, who set it up with his head for Jess to complete it directly in the net successfully.

In the second match, French defender Ferland Mendy gave his team a fatal victory real Madrid Atalanta, the Italian, who has been numerically deficient since the 17th minute, by 1-0 on Wednesday.

In the 86th minute, Mendy scored the goal of salvation with a curled shot with the right foot from 25 meters, which settled to the left of the goalkeeper Biarluigi Gulini, and gave his team an advantage before the second leg at his home, “Santiago Bernabeu” on March 16, to reserve his card in the quarter-finals.

A surveillance camera documenting the return of a lost wallet to the home of its owner by a man. How did she react?