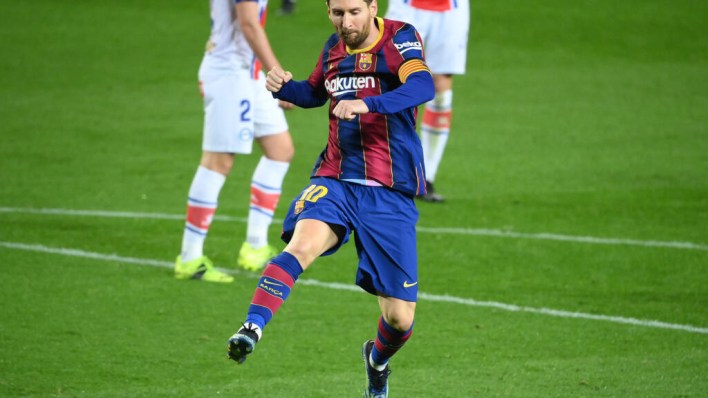 Paris Saint-Germain and Barcelona on Saturday achieved two important victories in the French and Spanish League, respectively, before their upcoming confrontation in the first leg of the Champions League final on Tuesday. In Italy, leaders AC Milan and defending champions Juventus swallowed the bitterness of defeat in a round that could rise in the end, Inter Milan to the top. As leaders Manchester City continue their winning streak in the Premier League, which saw another defeat for defending champions Liverpool.

Napoli saved their coach Gennaro Gattuso from being sacked when he knocked out his guest Juventus The defending champion beat him 1-0, while Spezia helped Inter Milan when it won a historic 2-0 victory over leaders Milan on Saturday in the 22nd stage of the Italian Football Championship.

In the first match on the stadium “Diego Maradona“In Naples, Lorenzo Insigne scored the only goal in the 31st minute from the penalty spot, returning his team to the winning streak after a draw and two losses against Genoa 0-1 in the league last Saturday and against Atalanta 1-3 last Tuesday in the second leg of the Cup competition, which was stripped of its title after a draw. Back zero – zero.

Napoli revived his hopes of competing for one of the cards that qualify for the Champions League competition next season, which is considered a goal for him this season, after he rose to fourth place temporarily with 40 points with a postponed match against Juventus in particular.

On the other hand, Juventus’ loss came before its host Portuguese club Porto on Wednesday in the first leg of the Champions League final. Juventus stuck at 42 points in third place and is now threatening to fall to fifth after playing Sunday’s matches.

Milan’s balance stuck at 49 points and was threatening to lose the lead if its neighbor defeated Lazio on Sunday, before the hot derby between the two poles of Milan next Sunday.

In Spain, Atletico Madrid, the leaders and deficient due to the Corona virus, achieved their fifth victory in the Spanish Football League for the first time since 2014, with difficulty Saturday at the expense of their host Granada 2-1 in the twenty-third stage, which also witnessed Barcelona sweeping Alaves 5-1 and regained Descriptive.

Atletico, who is searching for their eleventh title in the league and for the first since 2014, strengthened their lead to 54 points from 21 games, 8 points behind champions Real Madrid, who played more matches and faces Valencia on Sunday.

And in the second game, Duck Barcelona Alaves scored five guest strikes, including two doubles for the Portuguese Francesco Trencao (29 and 74) and the Argentine Lionel Messi (45 + 1 and 75). Junior Verbo added the fifth (80), while Alaves scored his only goal by Luis Rioja (57).

Barcelona issued a strong warning to its French guest, Paris Saint-Germain, who hosted them after three days at the Camp Nou in the first leg of the Champions League final.

Barcelona regained second place with 46 points and goal difference from arch-rivals Real Madrid, reducing the difference to 8 points from Atletico Madrid, who has a postponed match.

In the French league, prepare Paris Saint-Germain To his trip to face Barcelona in the Champions League by winning 2-1 at home to Nice today, Saturday, to lead the Ligue 1 league for football.

Italian striker Moise Kane scored the winning goal after Rooney Lopez canceled in the 50th minute Julian Draxler’s lead to the hosts in the first half and the defending champion has 54 points from 25 matches and leads on goal difference over Lille, who host Brest on Sunday, while Olympique Lyon are third with 52 points. .

Manchester City and Liverpool are on opposite sides

In England, Ilkay Gundogan continued to shine and scored two goals to lead leaders Manchester City to a 3-0 win over Tottenham Hotspur in the Premier League to continue his strong championship career.

City have 53 points, seven points behind second-placed Leicester, who beat champions Liverpool 3-1 on Saturday. City has one game postponed. Although 15 rounds remain, it is difficult to prevent City at its current level from winning the title for the third time in four years.

In another match, Alison committed a goalkeeper Leferball A new fatal mistake gives Leicester City a chance to make up for a goal late to win 3-1 in the English Premier League on Saturday.

Defending champions Liverpool have lost three consecutive league games for the first time since November 2014 when they were led by current Leicester City manager Brendan Rodgers.

Nuclear missiles .. Will they become the solution to transport humans to Mars safely?