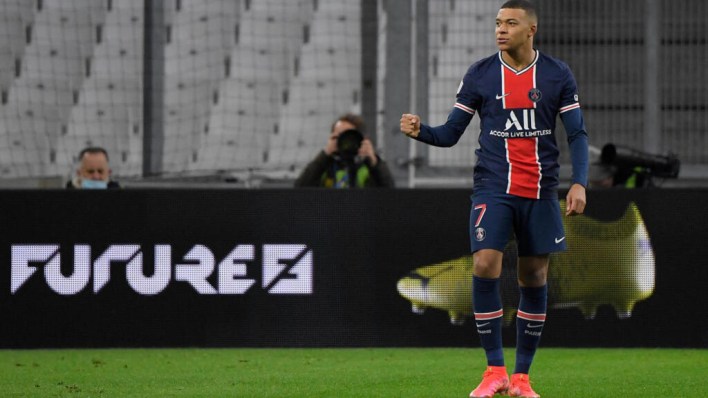 Paris Saint-Germain striker Kylian Mbappe shone in the match that brought his team together in Barcelona in the first leg of the Champions League final. The 2018 World Cup champion was dazzled by his performance by the fans and football fans, and he was praised by various media outlets, which described him as “nuclear”, which “blew the Camp Nou stadium like a hurricane.” And “he now appears ready to snatch the crown of the world football from Messi.” Which “faded its luster like a gradually extinguishing candle.”

Paris Saint-Germain star Kylian Mbappe played a big role in The result of a broad win Which the Parisian team returned from Barcelona. This is thanks to a historic trilogy that he signed, which was applauded by not only the club fans, but also by the football fans in general. Mbappe participated in this match bearing a promise to his coach.

The Paris Saint-Germain striker asked his Argentine coach, Maurizio Pochettino, before the confrontation about the number of victories he had achieved against Barcelona when he was coach of Espanyol, and he answered that he had achieved this only once, so the 2018 World Cup winner promised him that he would raise the number to two victories.

Mbappe actually fulfilled his promise, leading his team to a historic 4-1 victory in Barcelona’s Camp Nou stadium, and taking a giant step towards the quarter-finals.

Mbappe was responsible in this interview, especially in the absence of the Brazilian stars Neymar and Argentine Di Maria, knowing that he was subjected to severe criticism last season, when he failed to score goals in the knockout stages despite his team reaching the final match and losing to Bayern Munich 0 -1 .

But in front of Barcelona, ​​he had another opinion, this time, in which he expressed his scoring personality, and the audience got to know the real Mbappe, who exposed Barcelona to a heavy loss, which may complicate the task of overcoming the Parisian team in the second leg.

And his recording of the trilogy confirmed his strong presence in the Paris Saint-Germain attack. The first goal came after receiving a ball inside the area, as he brilliantly got rid of his compatriot Clement Langley with a wonderful technical move, before he hit a strong ball with his left into the roof of the net, then took advantage of a mistake to disperse the ball from the returning defender Gerard Pique to deposit the ball into the net, and then finish the festival with the most wonderful goal From a quick counter attack and a neat pass from German Julian Drexler, to strike a curled ball into the far corner of German goalkeeper Mark-Andre ter Stegen.

Thanks to his hat-trick, Mbappe raised his score to 5 goals this season, and finished second with four other players, knowing that he tops the French League also with 16 goals.

Mbappe’s brilliance did not go unnoticed, especially as he surpassed Barcelona’s Argentine star Lionel Messi, and European newspapers praised him and praised him with the words “galactic”, “hurricane” and “nuclear”.

The French newspaper L’Equipe considered that “Saint-Germain had succeeded in taking revenge against the terrible Remontada of which he was victim four years ago.” The angle was a fantasy, not a reality. “

Yesterday, Saint-Germain surpassed the truth thanks to a strong and triple collective force of Kylian Mbappe, the nuclear program.

On the other hand, the Spanish newspapers did not sympathize with Barcelona, ​​describing the possibility of turning the tables backward as null. And Marca wrote: “Barcelona are light years away from the reign of their domination at the continental level, they have humiliated again in the Champions League.”

Praising the ultimate star of the match, she added: “Mbappe passed the Camp Nou stadium and blew it like a hurricane. It was a historical show that will remain engraved in the minds forever.”

As for the other Catalan newspaper “Sport”, it considered that “Paris Saint-Germain destroyed Barcelona”, noting that the latter “fell in a new European test in the face of a rival who starred in its ranks, the giant Mbappe.”

On the other hand, the English newspapers considered that the great result and the brilliance of Mbappe specifically indicates that the global football scene may witness the transfer of power from Messi to Mbappe in the coming period. The Sun newspaper said: “Lionel Messi, who was considered for a long time the best player on the planet, not only in his generation, but over time, played a secondary role in front of Mbappe,” noting that the French star “now appears ready to snatch the crown of the global football from Messi “.

The Telegraph was almost the same, saying: “Messi has been the dominant star in the last ten years, and Mbappe will definitely be so in the next decade.” “Mbappe achieved one of the most prominent hat-trick in recent years at the European level, at a time when Messi’s luster faded like a gradually extinguishing candle,” she concluded.

Top 5: Loujain Al-Hathloul's demands before a Saudi court ... A Syrian officer is imprisoned in Germany