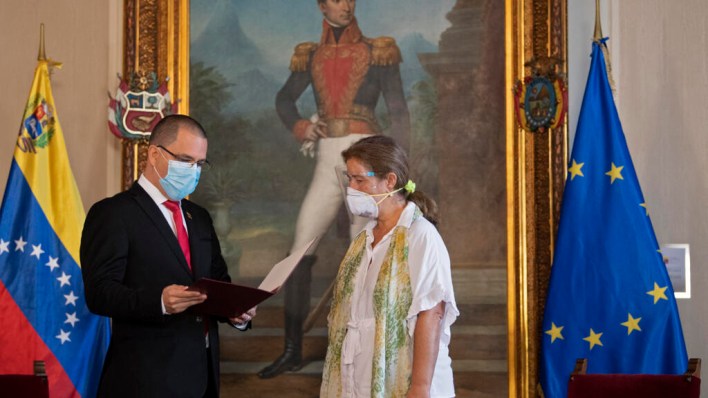 On Wednesday, Venezuela expelled its European Union ambassador, giving her 72 hours to leave the country, in response to the bloc’s imposition of new sanctions on senior officials. For its part, the European Union called on Venezuela to “go back” on its decision.

Venezuelan Foreign Minister Jorge Ariasa announced that his country decided Wednesday to expel an ambassador European Union Caracas has 72 hours to leave the country, in response to the European Union imposing new sanctions on senior officials.

The minister told reporters in Caracas, “Today, by the decision of President Nicolas MaduroWe handed over to Mrs. Isabelle Brillanti … a declaration that he considers persona non grata. ”He added,“ It took 72 hours to leave Venezuelan territory. ”

The European Union demands that Caracas return to its decision

For its part, the European Union called Wednesday on the government of Venezuela to “return” to its decision to expel its ambassador to Caracas, which was taken in response to the imposition of new European sanctions. A spokeswoman for European Union Foreign Minister Josep Borrell told Agence France-Presse, “We call on the (Venezuelan) authorities to return to this decision, which will further isolate Venezuela.”

Punishments are the cause of contention

And the European Union imposed sanctions on 19 high-ranking employees of Nicolás Maduro’s regime for their role in practices and decisions deemed to undermine democracy and the rule of law in Venezuela.

With this decision, which was approved by the foreign ministers of the member states of the European Union, the total number of officials and senior employees of the Venezuelan government who were imposed on them by European sanctions, including a travel ban to the countries of the Union and the freezing of their assets there, brings to 55.

And the European Union imposed sanctions, in particular on Omar Jose Prieto, governor of the state of Solia, the commander of the armed forces, Remijo Ceballos Ichaso, and three officials in the electoral council, including its president, Indira Mayra Alfonso Isagiri, as well as two deputies.

After boycott threats ... The International Volleyball Federation allows athletes to wear a bikini to an international tournament in Qatar