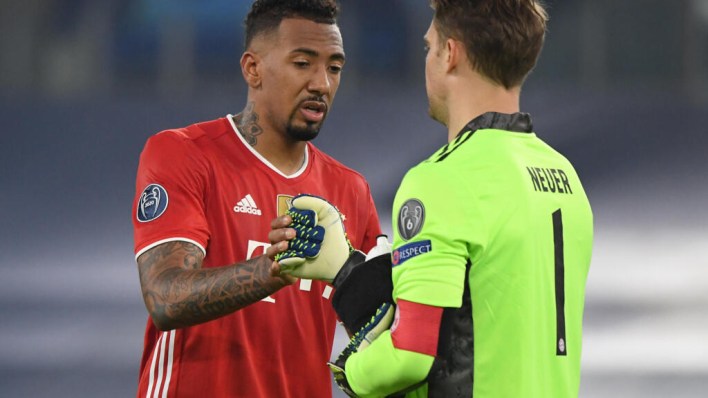 Bayern Munich, the defending champion, managed to cross into the quarter-finals in addition to the English club Chelsea, by beating Lazio 4-1 and Atletico Madrid 1-0 Tuesday in the first leg of the Champions League final.

mug Bayern Munich The German defending champion gave up his fangs and cut a huge way with Chelsea to qualify for the quarter-finals, by beating Lazio 4-1 and Atletico Madrid 1-0 Tuesday in the first leg of the Champions League final.

In the match that took place at the Olympic Stadium in Rome, Bayern proved that it is still the difficult number in the old continent despite some local stumbling recently, whether in the cup or the league, by sweeping Lazio in a match that was decided in the half by scoring three goals.

The defending champion entered his meeting with the Italian capital team, which is in one of the elimination rounds of the continental competition for the first time since his first participation in the 1999-2000 season, against the backdrop of a draw and defeat in the domestic league against Armenia Bielefeld (3-3) and Eintracht Frankfurt (1-2), to add These two results resulted in him relinquishing the cup title by leaving the second round at the hands of a second-division team.

It seems that the rebuke that the President of the Bavarian club Karl-Heinz Rummenigge addressed to some players, especially those concerned with the defensive part, which cost the team 31 goals in 22 matches so far in the local league, paid off Tuesday in the Italian capital.

Bayern started the match in the best way, as after being the most dangerous since the start whistle, he succeeded in opening the scoring, taking advantage of a fatal mistake by Argentine Matteo Musaccio in a pass. the ball In front of his team area, Lewandowski snatched it and Briana manipulated before he hit the empty net (9).

Lazio tried to return quickly to the meeting, but was unable to reach goalkeeper Manuel Neuer, then his resolve was completely frustrated when Bayern surprised him with a second goal through the young Musiala, who reached the ball from Leon Goritska after a distinguished effort by Canadian Alfonso Davis, and he shot it from the outskirts of the region to the right of Reina (24) ).

Inzaghi also tried to rectify the situation, so Mosacio removed the Bosnian support for Lulic (31), but nothing changed, but Lazio almost received the third goal after a mistake in dispersing the ball from Reina, but the Spaniard replaced him with a shot by Lewandowski (35).

Lazio woke up in the last minutes of the first half, but without success in front of the goal, so he paid the price with a third goal from a counterattack after an incursion by French Kingsley Coman on the left side before he tampered with the defender and passed to Le Roy Sané, who deposited it with Reina (42), so that the capital club received three Goals in the first half for the first time in the history of his participation in the competition.

Bayern began the second half by finishing the first and added the fourth goal with a gift from Francesco Acherby, who accidentally diverted the ball into his team’s net the moment he intercepted the Sanne ball (47), but Lazio reduced the damage after seconds thanks to Argentine Joaquin Correa after a wonderful individual effort (49).

In Bucharest, where the match was held in place of the capital, Madrid, due to travel restrictions imposed on British residents, veteran French striker Olivier Giroud scored a goal from a superb scissor to give Chelsea a valuable victory over Atletico.

The performance was lackluster in the first half, with control by the visiting team, in exchange for Atletico’s reliance on counter-attacks, which were shy in general and did not pose any danger to Chelsea’s Senegalese goalkeeper Edward Mendy.

On the other hand, the two most prominent chances were for Chelsea, the first when Hudson Odoi passed a cross from the right wing that was deflected by German striker Timo Werner, but passed alongside the right post of the goal of the giant Slovenian goalkeeper Jan Oblak (16). The second was also Liverner, who overtook defender Stephan Savic and hit the ball with his left hand. Oblak was looking for her (38).

The performance did not improve in the second half, which was completely devoid of real opportunities for the two teams before Giro scored his wonderful and sixth goal in the continental competition this season, deciding the result in favor of his team.

The two teams meet on the 17th of next month at Stamford Bridge in London, where Chelsea need a draw only to qualify.