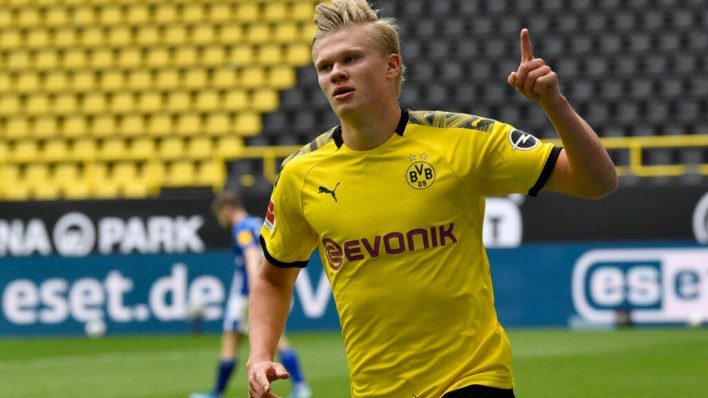 The performance of Mbappe and Haaland in the first leg of the Champions League final price stage raised many comments praising what each of them provided to his team, and a number of questions about the future of Ronaldo and Messi on the throne of the world football, and whether the two young players are ready today to receive the torch, knowing that there Who considered that the global football today is experiencing a phase of “handing over power” between two generations. The most important question that will be answered by the return interviews remains, will the veteran Messi and Ronaldo reconsider their reputations in these matches.

The two attackers stole the French promising Kylian Mbappe And the Norwegian Erling Haaland was striking at the opening of the first leg of the final round of the Champions League football competition, at the expense of the suffering of the veteran Argentine Lionel Messi and Cristiano Ronaldo in representing their teams best.

The Parisian striker became the first player to score a hat-trick at Camp Nou in the Champions League competition since it was done by Ukrainian Andrei Shevchenko in 1997, when the French Paris Saint-Germain star contributed to a broad victory over Barcelona, ​​Spain, 4-1, on Tuesday.

The next day, Haaland hit hard by scoring a brace for Borussia Dortmund against host Sevilla (3-2), with his making the first goal scored by Mahmoud Daoud of Syrian origin.

Haaland commented on his achievement against the Andalusian team with a smile: “When I saw Mbappe score three goals yesterday (Tuesday), it motivated me. So thank you!”

Mbappe is characterized by speed and dribbling, Haaland with strength and long shots, but what caught the eye was their playing style.

“I think Paris Saint-Germain has a very big star for the future, he will be at the level of Leo (Messi) or Cristiano (Ronaldo),” said Barcelona international French striker Antoine Griezmann of his compatriot Mbappe.

On the other hand, Sevilla coach Julen Lopetegui described the Norwegian giant (1.94 m) as belonging to “the best players in the world in attack.”

Moreover, Haaland is just one goal away to equal Mbappe’s record (19 goals) in the number of goals scored in the prestigious continental competition before reaching the age of twenty-one.

At the same age, Messi scored eight goals, while Ronaldo did not score a single goal.

“It’s about handing over power. It could be the next competition, which will last 10 years,” said British BT Sport analyst, former Manchester United and England defense mogul Rio Ferdinand.

The popular sports program “Sportshaw”, broadcast by the German “ARD” channel, summed up the issue as “The Next Generation: Mbappe and Haaland are stealing the stardom of Messi and Ronaldo in the Champions League.”

In Spain, netizens were involved in a major debate about which of the two players Real Madrid should sign to fill the void left by the departure of “CR7” to Juventus in the summer of 2018.

“It seems that Haaland is a player who knows how to finish attacks, the final touch, while Mbappe has more qualifications,” said Alfredo Relaño, the Spanish sports newspaper AS journalist.

Two veteran lions are required to restore their reputation

Eleven golden balls between them, nine Champions League titles, 134 goals for Cristiano and 119 for Messi in the continental competition … Messi and Ronaldo have soared over the course of a decade, like wild animals that leave nothing but crumbs for others. But it looks like they’ll be content with a slice of cake this season.

Barcelona lost Messi at home 1-4, and now needs a miraculous “Remontada” in the second leg at the Princes Park stadium on the tenth of next March, to avoid an early exit from the competition.

The flea state as he left the Camp Nou stadium, restrained and silent, contrasts with the anger of “CR7” after his team lost to host Porto 1-2 on Wednesday.

“Don” Ronaldo Jam blew his anger at the referee in the stoppage time, calling in vain for a penalty after contact with a defender of the owners of the land.

Rather, the Italian press focused on Thursday on his overall performance in the match, which was disappointing.

“He was not motivated by Mbappe, he seemed to want to imitate Messi. Penalty or not, there are no excuses,” wrote the newspaper “La Gazzetta dello Sport”, indicating that the only goal of the Catalan club against Paris Saint-Germain was scored by Messi with a penalty kick.

The sky appears cloudy over the two stars: Messi, at the end of his contract, feeds rumors of his departure next summer, while “Juventus” Ronaldo, in poor condition and facing the risk of not winning the Italian League for the first time since 2011.

However, on the individual level, Messi (20 goals) and Ronaldo (23) share similar statistics as Haaland (25) and Mbappe (21) this season.

As for Nantes’ French coach Antoine Compuare, “If you look at the performance of Messi and Ronaldo, they are still here. I heard some people asking if Mbappe can sit at their table. No, no, no … He is an exceptional player, great, but he is … Young man, “adding” when he has three or four golden balls, we can discuss the matter. “

Will the veteran lions be able to bite again during the second leg to save their reputation and their teams’ bid farewell to the competition?

Top 5 .. Turkey responds to the "harassment" of its ship ... and an Egyptian-Qatari meeting in Kuwait