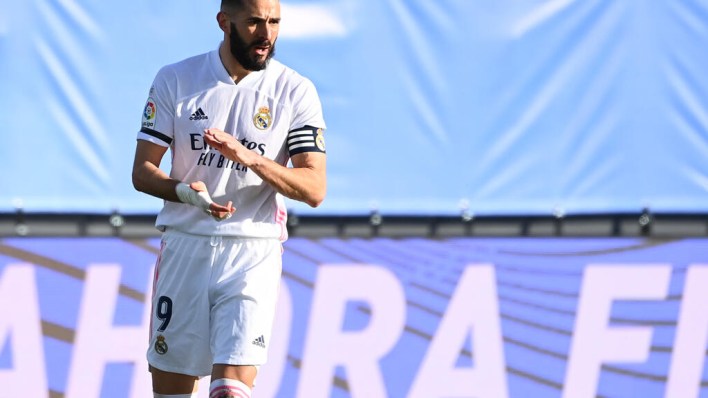 Karim Benzema joined a long list of injuries at Real Madrid after coach Zinedine Zidane announced on Friday that the striker will miss Real Valladolid’s match in the Spanish Premier League on Saturday, and his participation in the Champions League against Atlanta in the Champions League round of 16 next week is also suspected. .

It will be the participation of the Frenchman Karim Benzema With Real Madrid, Spain, against Atalanta, in the first leg of the Champions League final, next Wednesday is in doubt, after his countryman and coach Zinedine Zidane announced on Friday that his striker had been injured.

Benzema missed the training session of the capital team on Friday morning, as Zidan confirmed that his scorer will not travel with the team to face Valladolid in the local league competitions on Saturday.

وقال Zidane During the press conference on the sidelines of the meeting, “He will not be with us tomorrow. He has a problem that appeared yesterday, so he will not be with us. We will see for next week,” noting that the club has not yet clarified the details of the injury.

And if the second LaLiga rankings are a candidate to override Valladolid on Saturday without his French striker, his absence from the trip to Bergamo could be a heavy blow to Real Madrid.

The Frenchman has scored 17 goals in all competitions with his club this season and has been doing well recently, having scored in the last two games.

Zidane added, “We know what Karim offers us and how important it is to us. But we have to deal with the situation and hope that he will return to us as soon as possible, like all other players.”

Real are six points behind their neighbors and rivals in the capital, leaders Atlético, knowing that the latter played less matches.

In response to a question about his opinion of his countrymen Kylian Mbappe Paris Saint-Germain star and Norwegian Erling Haaland, the German sniper of Borussia Dortmund, after their impressive performance in the Champions League mid-week, Zidane said, “They are two great and small players, both present and future players. I will not comment if I am the best of them, everyone has someone they prefer.”

Mbappe, whose contract with the French capital team expires in June 2022, has been linked specifically to a move to Real Madrid.

Watch ... a truck slides down the hill after the street turns into a "skateboard"